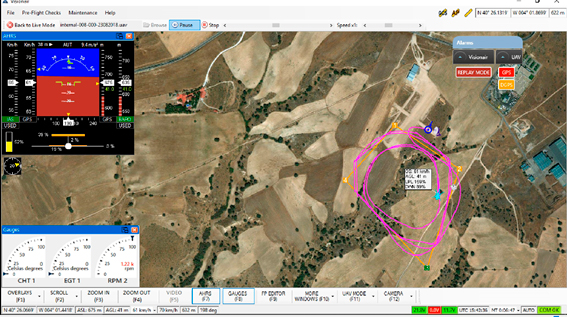 Drone usage is expected to soar over the next several years. As legal regulations evolve, many industries will embrace drones for a multitude of tasks from infrastructure inspections to commercial fishing and beyond. And despite the potential for enormous growth, this revolutionary technology has an Achilles heel that is rarely mentioned- it is fully dependent on Global Navigation Satellite System (GNSS)/GPS navigation.

All drones rely on GNSS to maintain a stable position and/or to navigate between waypoints. At the same time, all small drones use MEMS sensors to estimate their attitude. These sensors are accelerometers, gyroscopes and magnetometers that provide data on the aircraft’s three axes.

A common assumption is that by having accelerometers and gyroscopes, a simple integration of their data can provide speed and orientation; and that with a second integration, position can be calculated too.

But it’s actually not that easy. The measurements that these sensors provide include errors, noise and deviation. And while the sensors may include relatively small mistakes in the raw measurement, when integrated together they generate much bigger errors that make navigation and position estimation impossible.

When the GPS signal is lost, the safest strategy for a drone is to hover, maintaining altitude by means of the barometric pressure and attitude reading from the AHRS (attitude and heading reference system)–in other words, keeping pitch and roll angles at 0. With this strategy, the UAV will drift from its position proportional to the wind speed.
In case of GPS loss, the pilot must take manual control to land the UAV safely.

But what happens when the UAV is jammed?  Commercial jammers and counter-UAV systems function by emitting strong signals towards the aircraft using the most commonly used frequencies for UAVs, which for communications are 900 MHz and 2.4 and 5.8 GHz, and for GPS are the L1 and L2 bands. The effect of the strong signals emitted by jammers is that the SNR (signal-to-noise ratio) is so small that the receiver cannot decode the real signal from the noise–similar to when we cannot understand someone speaking in a room full of other people talking.

When a UAV is jammed, the UAV will lose both GPS, and therefore navigation, and remote control from the pilot. Again, the most conservative option for the pilot is to maintain a constant attitude (pitch and roll equal to 0) and to descend in controlled way until the UAV touches the ground. This is what 99% of commercially available drones do and what makes jammers and other counter-UAV measures so effective.

Thanks to its use of a high-end autopilot and the integration and calibration of the ADS (air data system) composed of a pitot tube and static port, Alpha Unmanned Systems is able to calculate the estimated wind–which in case of GPS signal loss would be used to calculate the UAV’s estimated ground speed by means of the following formula: Estimated Ground Speed = Indicated Air Speed – Estimated Wind.

By means of the integration of the air speed and considering that wind direction and speed is constant, we can estimate the UAV position with approximate precision that is usually “good enough.”
But what does “good enough” precision mean? It means that Alpha Unmanned Systems UAVs can maintain and follow a flight plan of command and fly to a certain area, or return home safely if the UAV is on BLOS. The long-term error is approximately 50 meters per minute, though the more unstable the wind is the higher the error will be.

So can a “jammed” UAV continue flying? Yes. Although communications would probably be lost, the good news is that normal jammers have an effective radius of several hundred meters, so once outside of jammer-range, the UAV can recover the GPS signal and continue its mission. And even if the pilot knows that the UAV will be jammed, it can be flown over the area while knowing that comms will be lost.  Information taken on can be recorded and stored onboard, to be downloaded later once out of the blocked/jammed area.

Alpha Unmanned Systems has integrated a complete pitot tube in its tactical UAV helicopters. The Alpha 800 performs dead reckoning operations and has proven its success in multiple tests.

This website uses cookies to improve your experience while you navigate through the website. Out of these, the cookies that are categorized as necessary are stored on your browser as they are essential for the working of basic functionalities of the website. We also use third-party cookies that help us analyze and understand how you use this website. These cookies will be stored in your browser only with your consent. You also have the option to opt-out of these cookies. But opting out of some of these cookies may affect your browsing experience.
Necessary Always Enabled
Necessary cookies are absolutely essential for the website to function properly. These cookies ensure basic functionalities and security features of the website, anonymously.
Functional
Functional cookies help to perform certain functionalities like sharing the content of the website on social media platforms, collect feedbacks, and other third-party features.
Performance
Performance cookies are used to understand and analyze the key performance indexes of the website which helps in delivering a better user experience for the visitors.
Analytics
Analytical cookies are used to understand how visitors interact with the website. These cookies help provide information on metrics the number of visitors, bounce rate, traffic source, etc.
Advertisement
Advertisement cookies are used to provide visitors with relevant ads and marketing campaigns. These cookies track visitors across websites and collect information to provide customized ads.
Others
Other uncategorized cookies are those that are being analyzed and have not been classified into a category as yet.
SAVE & ACCEPT
Powered by

You have successfully subscribed
to our newsletter